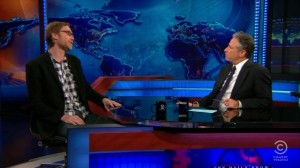 Did you catch Stephen Merchant last week on “The Daily Show”?

I’ve always thought he was hilarious from his days writing for the UK version of “The Office” and “Extras” as well as his podcast with Ricky Gervais. He has a new project with Ricky Gervais called “Life’s Too Short,” which just started airing in the U.S. on HBO.

Check out his off-the-cuff interview with Jon Stewart, discussing the problem with being 6’7″. I love the back-and-forth and Stephen proves that he can definitely hold his own.