Banging on about bacon 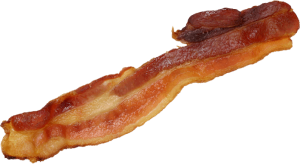 If you’ve ever had Irish bacon (blah!!) or British bacon (double blah!!), you know what it’s like to taste rubbery, salty, greasy, limp fat. It’s ridiculous that it can even be called “bacon.” It should be called “snake-in” instead of bacon because it’s like a deceitful snake in bacon’s clothing.

The closest you’re going to get to American bacon is streaky bacon (aka rashers), which is the nearest cousin to our native bacon. Never be mistakin’ back bacon for bacon. It has far too much meat on it – not enough crispy fat – and is probably why people like to drown their bacon butties (bacon sandwiches, made from back bacon) in brown sauce, and why we, in contrast, celebrate our bacon sandwiches by topping them with lettuce and tomato and a thin spread of mayonnaise, so the baconyness really shines through.

What I really haven’t been able to figure out is why more countries don’t hop on the American bandwagon and make their bacon like we do. After all, a pig is a pig is a pig, no matter where you live. Answers on a postcard, please.