← Movie review: “The Hobbit: An Unexpected Journey”
Peter Rabbit line at the Gap → 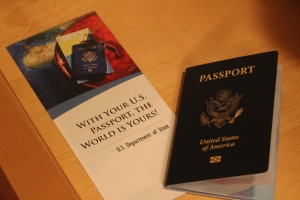 My son’s first U.S. passport was issued when he was about 2 months old. He couldn’t sit up yet. In his passport photo, he looked like a little potato (don’t get me wrong, he was a cute potato), head akimbo, slouched over a bit.

Five years later and his passport expired. Opportunity for an updated passport photo that resembles the boy that he is now – hurray!

What I hadn’t expected was how involved the process is to renew your U.S. passport for minors under the age of 16. Yes, I went through it the first time in applying but clearly it’s something that can be forgotten by the time the passport expires.

Unlike adults who can mail off their passport for renewal, minors have a more hoops to jump through. Minors and both of their parents must reapply in person at an acceptance agency. You must bring in your child’s old passport, as well as the child’s birth certificate and passport photo (some agencies can take photos on the spot for an additional fee, but we just got ours taken at Walgreens!). Form DS-11 can be filled out ahead of time, but not signed until an agent can witness your signatures. After all of this rigamaroll, the agency still must mail out your passport to be processed, which takes four to six weeks.

Four to six weeks?! Whaaa? Well, here are my top five tips for getting your child’s passport issued/renewed pronto:

1. Cut through some of the red tape by making an appointment at a passport agency. There are 26 passport agencies in the U.S. — these are places where passports can be issued on the premises.

4. Bring a checkbook (although our agency also accepted credit cards). For a $60 expedite fee on top of the $105 application and execution fees for minors, you can meet with a passport agent, drop off your passport documentation and pick it up in five business days. In our case, we dropped the passport off on a Friday (the appointment took about 45 minutes – most of that time was spent waiting for our number to be called) and received it in the mail exactly 1 week later. For those with immediate travel plans and a need for a passport or passport renewal, make sure to bring your proof of immediate travel (copy of airline tickets, etc.) for verification.

We found that the Passport Agency staff were helpful and the turnaround time couldn’t be beat. Even better, it virtually eliminates the usual anxiety of wondering if the passport got lost in the mail, if it will arrive in time for your trip, and so on and so forth!

← Movie review: “The Hobbit: An Unexpected Journey”
Peter Rabbit line at the Gap →