Dining at The Spotted Pig 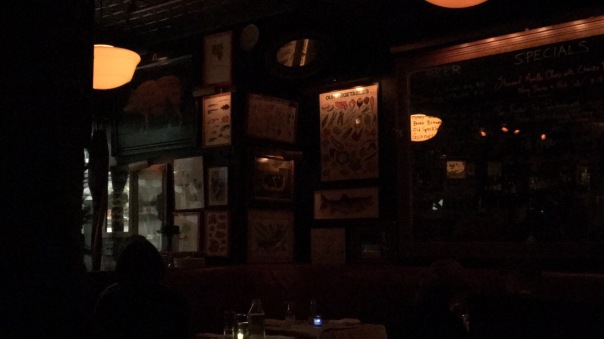 I’ve been wanting to eat at the Spotted Pig in NYC for quite awhile.

With British chef April Bloomfield at the helm, it has reached legendary status among celebrities and foodies alike and has shown the world over that British food can be tasty.

Taylor Swift and Calvin Harris eat at the Spotted Pig.

We came for dinner on Friday night around 7 p.m. and were told that it was a two to two-and-a-half hour wait. There don’t take reservations – ever. Only the opportunity to leave your cell number and, of course, there’s this great big beautiful city to browse while you are waiting.

We had a drink at the White Horse Tavern, which was nearby, and best known for being Dylan Thomas’s favorite watering hole (along with many other writers like Hunter S. Thompson, Jack Kerouac, James Baldwin, and the list goes on. It was a cash-only bar and felt like your average local pub in Britain.

Then we just took a stroll, making stops at Goorin Bros. Hat Shop and Sockerbit Swedish sweet shop, where we bought one of these for the holidays:

These gnomes are not edible.

It wasn’t until about 10 p.m. that they called our name. Score!