← You know you’re back in America when …
Happy Pancakes → 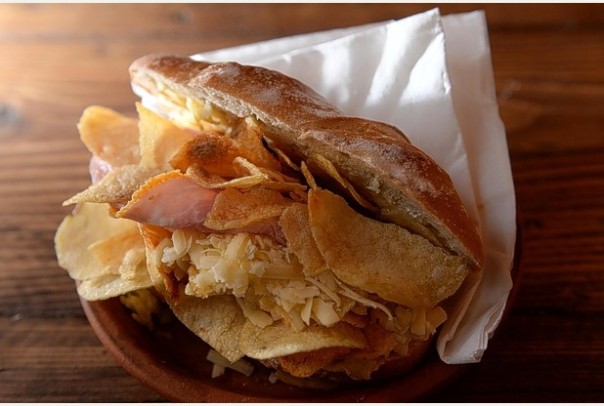 Leave it to the British masterminds who created the chip butty (fries in a roll) to also attempt the crisp (translation: potato chip) sandwich.

Yes, crisp sandwiches are now being sold at the Stock Exchange Bakery in Bristol. The bakery offers patrons the choice of granary bread or a white bun (baked fresh on the premises! and I’ve blogged before about how granary bread is the Best Bread on the Planet!) and a choice of 20 different crisps (the Brits have so much variety in flavors from roast beef to prawn cocktail and everything in between) to put inside. All this for £2.50 each. The Bristol Post reports that they’ve had queues around the block!

Not since this sandwich have I been so intrigued. Sigh. Will someone report on this from across the pond? Is it as good as it sounds?

← You know you’re back in America when …
Happy Pancakes →