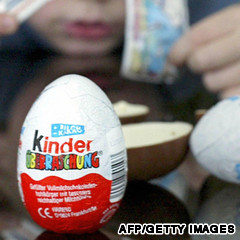 Before you attempt to head into the U.S. carrying Kinder Surprise eggs from the U.K., beware! The U.S. Customs and Border Patrol seized about 25,000 Kinder Surprise eggs in 2010 and reissued the warning that Kinder eggs are banned (due to the non-edible prize inside each egg). Rumor has it that if a Kinder egg is seized by customs, you can be fined for $2,500!

If you’ve never had a Kinder Surprise egg, they are quite fun little toys (i.e. cars, characters, even stamp rings) tucked inside a half milk chocolate and half white chocolate shell of an egg. You never know what you’re going to get! Nearly 30 billion have been sold worldwide.

And check out the Americanized version of the Kinder Surprise: The Choco Treasure! It launched last month.

Also, here are the top 10 items not to bring back from your international holiday.