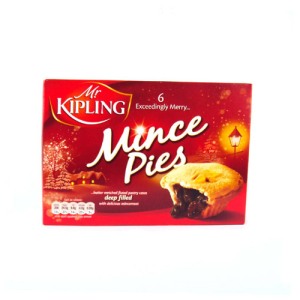 It’s nearly Christmas Day and in the frenzied rush up to Christmas, I’ve still not had one mince pie.

I was quite vocal about my dislike for the dried-fruit disaster better known as Christmas pudding, but mince pies takes some of the same elements, pairs them with pie dough and becomes magic.

I’m partial to the “exceedingly good” Mr. Kipling mince pies, available at Cost Plus, heated and eaten a la mode (but that’s an American thing. I don’t believe any self-respecting Brit would put ice cream on pie. Dessert is always served with cream).

Better yet, screw the warm pie crust top off (like a little hat), put a dollop of cream on it and then put the pie hat back on, before biting into the sheer bliss of Christmas. You’re welcome, America.