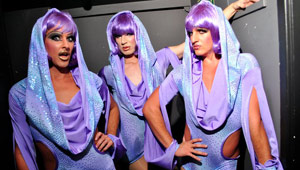 London is home to some pretty amazing drag queens, who could teach anyone a thing or two about wearing platform heels, applying false eyelashes and just being fabulous, dahling.

They are sharing some of their best-kept secrets in the Latin bar/restaurant Floridita in Soho. It’s called Drag Queen Dance Class, hosted by the Globe Girls, and it’s ever bit as amazing as you would imagine.

Give them 90 minutes and they’ll teach you how to workout in heels to some of Beyonce’s best pre-baby numbers, followed by a cocktail for £25. A lesson in lashes and walking in the highest of heels are included. More information here.