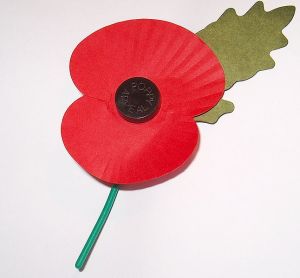 In the U.K., you’ll find poppy pins worn on people’s lapels in the days (and weeks) surrounding Remembrance Day (otherwise known as Veterans Day in the U.S.). They’re everywhere – on the young and on the old, on the streets, in offices, shopping centers, parks, restaurants. Everywhere.

Such is not the case in the U.S., where it’s uncommon to see poppy pins, particularly on Nov. 11.

Even on the U.S. Department of Veteran Affairs website, the FAQs page on Veterans Day reads: The wearing of poppies in honor of America’s war dead is traditionally done on Memorial Day, not Veterans Day. I would argue it’s also rare to see Americans wearing poppies on Memorial Day.

After spending some time looking online for a U.S. source selling poppy pins and coming up with nothing, it became clear why I’m not seeing these poppy pins anywhere. Sad. Gis a poppy. Please. Our country needs them!

On a side note, the U.S. is where the poppy tradition originated, at least according to Wikipedia so it must be true. Poppies were first used in the U.S. in 1920 to commemorate soldiers who died in World War I.